Enter the content which will be displayed in sticky bar.
Call Us Now: +1 416 805 5327 info@leappestcontrol.com

Fleas – An Overview of the Flea

Fleas have been known and hated by mankind for a long time, though they have often been confused with Bed Bugs, Lice and Mites such as Ticks, it is reported that the noblemen of India had beds hung from the ceiling that could be raised from the floor in order to allow them to escape the pestilent fleas. The role of pests and disease in human history is often neglected and the plague, a bacterial disease transmitted to man by fleas is considered by some to have caused more human grief and fear than any other single cause, and to have changed the course of history more than any other force. The fleas gift of plague to man has caused immeasurable numbers of human deaths.

Where Do Fleas Hide?

Misconception 1
Fleas are easy to get rid of…I know someone who had them before and got rid of them.

Reality
Ridding a home of fleas can be a frustrating and costly endeavor. Unlike some pests encountered around the home, fleas cause discomfort and irritation to both pets and people.

Misconception 2
It’s hard to even notice a flea bite because they’re so small.

Reality
Fleas account for more than half of all dermatological conditions requiring veterinary assistance, and even a single flea bite to a hypersensitive animal or person may cause intense itching and irritation. 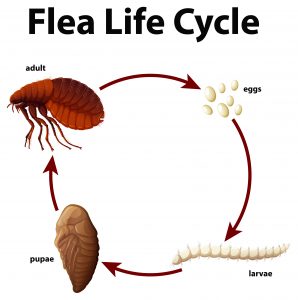 Q: Does my pet have to scratch before I know he has fleas?
A: Just because your pet is not scratching does not necessarily mean he is flea-free. Most of a flea’s life cycle is spent off of your pet. If your pet does not have sensitive skin or is not allergic to fleas (called Flea Allergy Dermatitis), he simply may not have the urge to scratch. In fact, you may have a major flea infestation and not know it.

Q: How do I determine if my pet has fleas?
A: You need to thoroughly examine your pet’s skin and haircoat under sufficient light. Fleas are reddish-brown and very fast, so you have to look closely. There may only be telltale flea dirt (flea feces), most often occurring above the dog’s rump or between a cat’s shoulder blades. Take a moist, white paper towel and rub it on the area. When moist, flea dirt turns reddish.

Q: Are fleas dangerous to pets or humans?
A: Fleas are not only a nuisance to humans and their pets, but can cause medical problems in pets including flea allergy dermatitis (FAD), tapeworms, hair loss, and secondary skin irritations. Tapeworms normally plague our pets but may appear in children if parts of infested fleas are accidentally consumed. In some cases, fleas have been known to spread bubonic plague from rodent to rodent and from rodent to humans.